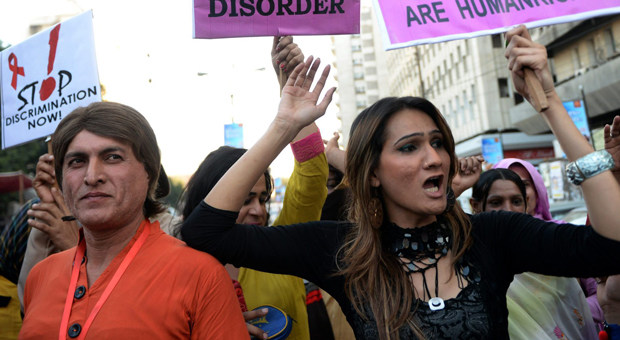 The policy shift was completed on Friday and will now define gender as a person’s biological sex.

The regulation established under former President Barack Obama defined gender as a person’s internal sense of being male, female, neither or a combination.

A hospital could be required to perform gender-transition procedures such as hysterectomies under the Obama-era federal rule.

The rule was meant to carry out the anti-discrimination section of the Affordable Care Act, which bars sex discrimination in health care.

The Department of Health and Human Services said it will now enforce sex discrimination protections “according to the plain meaning of the word ‘sex’ as male or female and as determined by biology.”

Activists and Democratic lawmakers noted that the reversal comes in the middle of LGBTQ Pride Month.

Behind the dispute over legal rights is a medically recognized condition called “gender dysphoria” — discomfort or distress caused by a discrepancy between the gender that a person identifies as and the gender at birth.

Treatment can range from sex-reassignment surgery and hormones to people changing their outward appearance by adopting a different hairstyle or clothing.

Many social conservatives disagree with the concept.

“Under the old Obama rule, medical professionals could have been forced to facilitate gender reassignment surgeries and abortions — even if they believed this was a violation of their conscience or believed it harmful to the patient,” said Mary Beth Waddell of the religious conservative Family Research Council.

But Democratic House Speaker Nancy Pelosi said, “Religious freedom is no justification for hatred or bigotry, and every American has the right to seek and receive care without intimidation or fear.”

“The federal government should never make it more difficult for individuals to access health care — during a pandemic or any other time,” said Dr. Susan Bailey, the group’s president.

Under the Obama-era rule, a hospital could be required to perform gender-transition procedures such as hysterectomies if the facility provided that kind of treatment for other medical conditions.

The rule was meant to carry out the anti-discrimination section of the Affordable Care Act, which bars sex discrimination in health care but does not use the term “gender identity.”

The ACLU says it has already moved to try to prevent the rollback of protections for transgender people.

More than 1.5 million Americans “identify” as transgender, according to the Williams Institute, a think tank focusing on LGBT policy at the UCLA School of Law.

A bigger number — 4.5% of the population— identify as lesbian, gay, bisexual, or transgender, according to Gallup.

For the Trump administration, it’s the latest in a series of steps to revoke transgender policies in areas ranging from the military to housing and education.

The administration also has moved to restrict military service by transgender men and women, proposed allowing certain homeless shelters to take gender identity into account, and concluded in a 2017 Justice Department memo that federal civil rights law does not allow transgender people to receive special treatment at work.

So grateful this has finally happened! Maybe now today’s children can grow up w/ a better chance of not being coerced and confused about themselves! That’s what this is all about…. people’s confusion because they were not taught who they are and how special they are just as they were created!